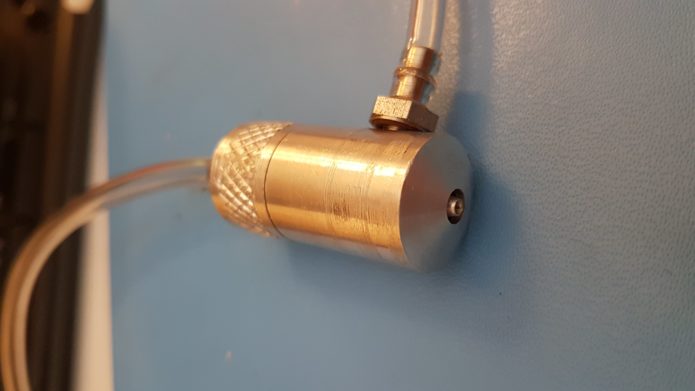 I like making things. Sometimes too much. I made my first coaxial nozzle 4 years ago and until this year I did not give it a decent shot. Wanna learn more about my first experiments with it? Lets do it!

First lets explain properly what is a coaxial nozzle. It is as simple as a nozzle inside of another nozzle. This allows to “wrap” a material with another. This would make sense for example to have a soft material inside and a “harder” one outside that acts as a wall.

“Made this coaxial nozzle during my time at Pier9, and never got to play much with it. Currently working on a cartridge retainer to play with it again but using compressed air extrusion MORE FUN💃💃💃! . . . #coaxialnozzle #3dfoodprinting #compressedairextrusion #3dprintinglife #3dprinting #3d #lathe #aluminum #machining #multimaterial #pier9 #AiR #Autodesk #nozzle #coaxial #extruder #extrusion #dualmaterial

BTW the idea of using a coaxial nozzle was suggested by Will during my time at Pier9.

The coaxial nozzle is made out of 2 parts. Inner and outer nozzles. It is easy to assemble the inner nozzle screws into the outer one. Both nozzle sections have inlets for each material. I use small luer-lock connectors.

Both parts were made using a lathe and a mill. Probably the hardest part to make the nozzles is the thread that mates both blocks. This is important because is what ensures that once the two parts are locked, both ends of the nozzles are flush. But overall as long as the nozzle diameter are not too small, I feel is fun project to make.

Once I had the nozzle made was time to play with it. I first started with manual tests, to later move on to printer test.

The first manual tests showed that the “bowden” like extruder required a loooooooot of force to push food through the small tube. By bowden I mean that the food travels through a tube between a reservoir/syringe/cartridge to the nozzle.

This showed not to have enough force to push most of material so I had to design a stronger extruder.

The truth is, that after the first results, I was a bit disappointed. I used mashed potatoes and did not like the results at all. Specially printing anything with coaxial nozzle requires an extra layer of complexity not just to run the hardware but to come up with the right sofware to build the GCode. Honestely I was disappointed, and stopped working on the nozzle for a while.

Fast forwarding into the future (current present – a few months ago) I decided to give it a go. With a two differences; new extruder that simplifies gcode/toolpath generation and different test materials.

I moved from motorized extruders two pressure based. Because they are easier to control, using a solenoid that goes on or off to print. The obvious trade off here is precision but that should not be a problem when learning to use something new.

It was also exciting, for me, to try to design and print a cartridge holder with a seal that could be used as an air compressed extruder.

If you are reading this, and you want to get one. Send me a DM on Instagram, I might have something to offer 😉

For the new set of tests, I switched “material” to Greek yogurt and food colorant. Also each test required a custom build tool to generate the toolpath that control each coaxial nozzle outlet.

The 1st pattern was based on alternated dots with different color. This was to test the precision of the new air pressed extruder using this nozzle. Pressure used was 2-3 bars.

A really interesting artifact happened when trapped air bubbles, burst at the end of a dot, creating a ring effect when the outer coaxial nozzle was used, check previous picture.

Second pattern was a snake shape. This time both exits were printing at the same time. It was really interesting to see how we could encapsulate a material inside another. It was hard to have a good consistency but not impossible. My favorite effect was cutting with a knife the lines after printing them.

The third test was first attempt to add a third dimension, or layering. It was fun to try, but greek yogurt by itself doesnt have a lot of consistency to hold its shape.

And here you can see a print test:

This is the last test I do with the current coaxial nozzle. During the last experiments and design apps I have learn a lot about it. Now is time to let it sit and think about the next iteration! More details to come 🙂 . . . #greekyogurt #coaxialnozzle #3dprintinglife #3dfoodprinting

During the test I felt a bit hopeless of this technique, but now as I review the results I see, with a bit more of perspective, what coaxial nozzle could do.

Ideally I would like to improve, the shape of the nozzle (current one being to large), test more materials, and figure out a way to have more height on the prints.