1. Could you please introduce yourself.

My name is Miguel Valenzuela.  I am a husband to a wonderful wife named Runi and father to two daughters, Lily and Maia.  I currently live in Norway and work as a design engineer for a subsea oil company.  I love to tinker, play with LEGO, and invent and I especially love drawing pancakes for Lily and Maia.

I was born in Mexico and moved to the United States at a very young age and lived all over the United States.
I have a degree in Bio Resource and Agricultural Engineering from Cal Poly San Luis Obispo in California.

2. How did you get involve into printing food? why pancakes?

It was an accident as a matter of fact.  I was reading an article in Make Magazine when Lily asked me what I was doing.  I told her I was reading about a guy named Adrian Marshall who made a prototype for a pancake stamping machine out of LEGO.  She turned to her sister and said, ‘Papa is going to build a Pancake Machine out of LEGO!’ and that is how it all started. Fig 2. Miguel, his daughters and the PancakeBot!
3. Why Lego?
Well, my daughter wanted it out of LEGO.  I thought it would be cool to stretch the concept and definitely an engineering challenge. 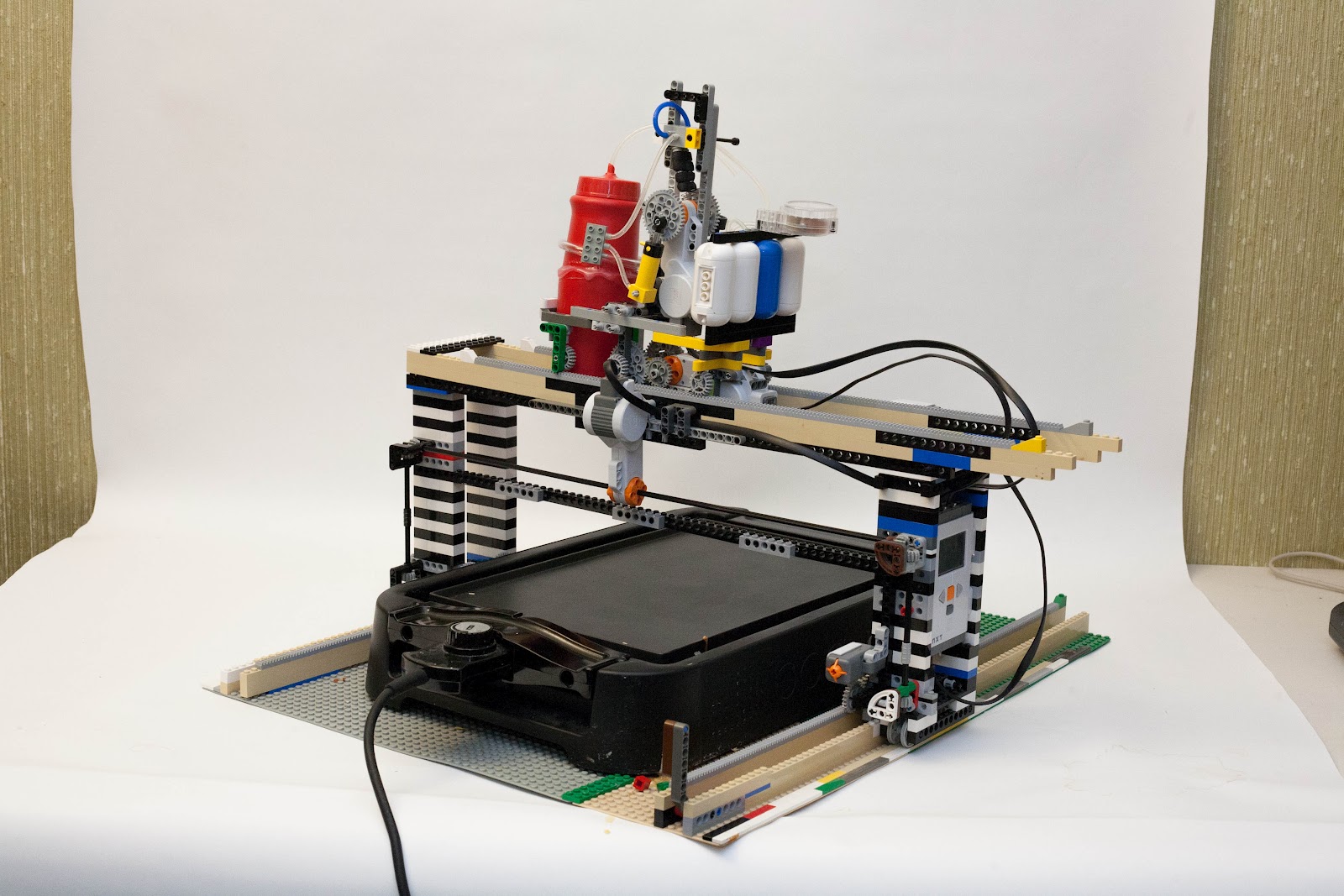 Fig 3. The PancakeBot made with Lego
4. What is the most challenging part for the PancakeBot?
Dispensing batter.  I’ve developed a way to dispense the batter using some specialised components and that took over  6 months to develop.  The new version mimics the same method but is more robust. 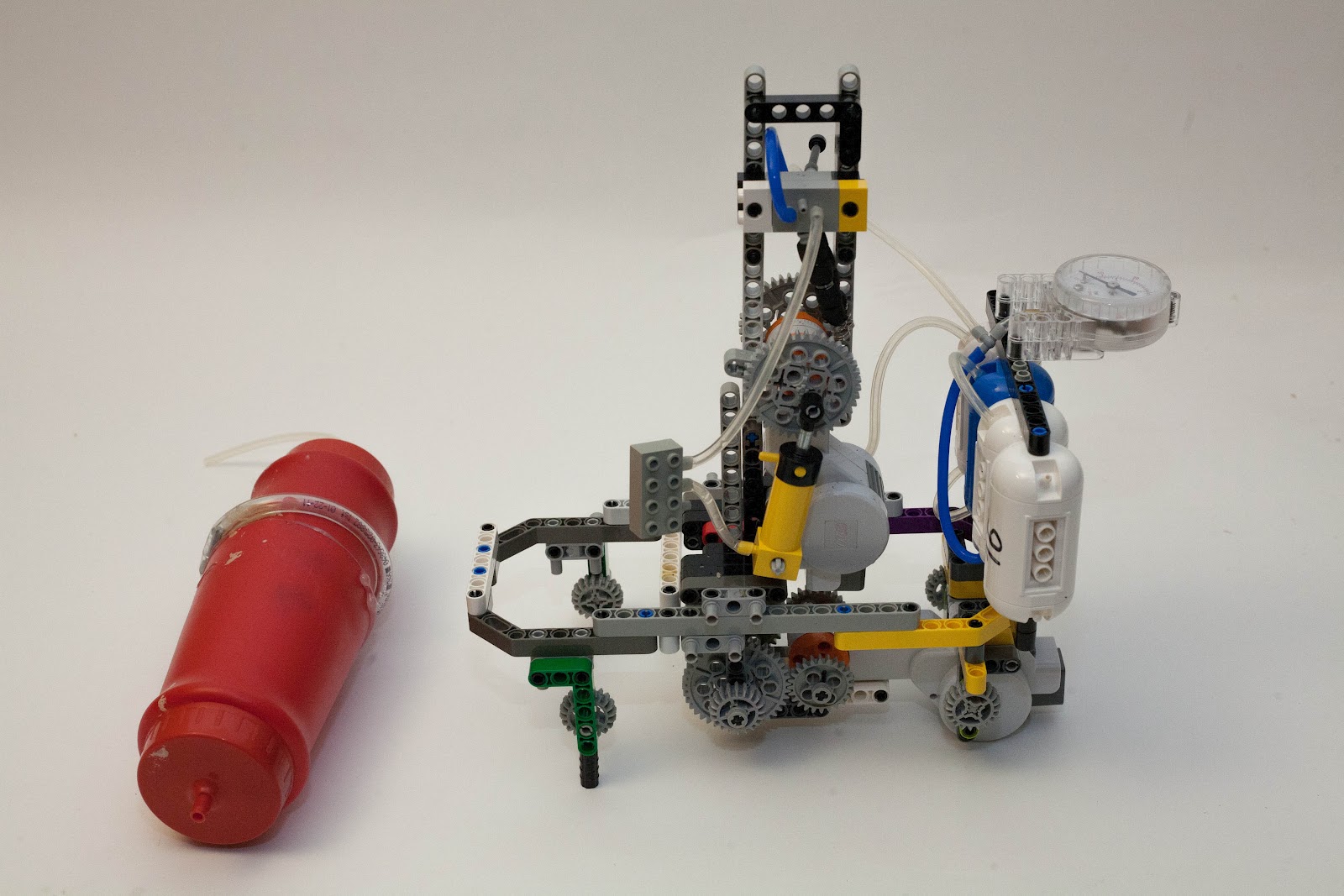 Fig 4. Butter dispenser unit
5. What is the future feature that you would love to have for the PancakeBot?
The ability to take a graphic and create a pancake as well as further developing the fill algorithm for it.
6. Why did you decide to open source it?
We are currently looking at all options, including a patent on the device but I owe a lot to the Open Source community so I would want to release an open hardware license for Makers.
7. What kind of feedback do you get from people when you show them your work? Any great moments?
Depends on who I am showing it too.  Kids usually are shocked and are in awe were as adults, tend to giggle nervously.
The best moment was at the New York Maker Faire when a young girl came over and said, ‘I came to the Maker Faire just for this.’  That really touched my heart.
8. Also I think you are a Maker Faires Pro which was your best experience?
It`s hard to say because every time we have shown PancakeBot, we have taken it up a Level so the each experience keeps on getting better.  But I really enjoyed the New York Maker Faire in 2012.
9. Could you share your opinion about the future of 3d food printing?
I think I see 3D printing opening up a new opportunity in the art community.  A way of expressing yourself using food.  Being able to consume something you create is a wonderful marriage of talent and inspiration and involves all the senses.  I asked my wife Runi, what I should do now that I have a PancakeBot.  And she said, ‘Make art with it.’ and so I did.  I created an animation strictly with breakfast food and it has garnered lots of attention with positive comments.
You can find it here.
And the video of how I made it:
Also, for those close to Paris, I invite them come and enjoy some pancakes at the Paris Maker Faire June 21st.
Tweet