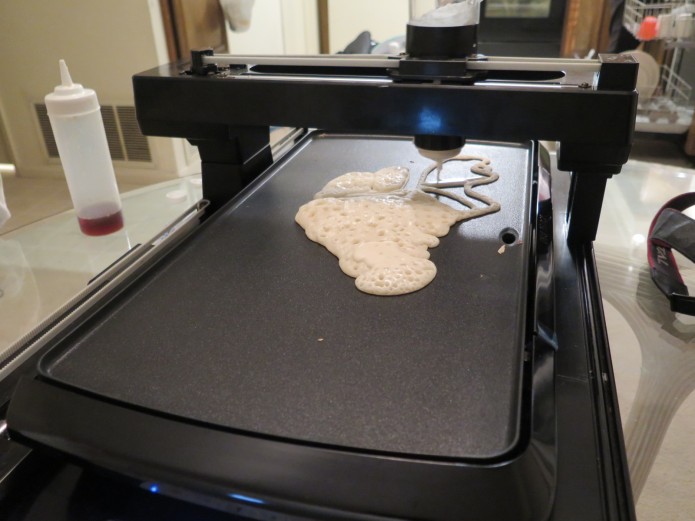 If you’ve been following the digital cooking world as of late you should be more than aware of Miguel and his awesome PancakeBot, and  if you’re a backer of the Kickstarter campaign earlier in the year then you should be salivating right about now because the news just dropped that it will be shipping your way soon!

Of course we reached out to Miguel before our 3D Food Printing Roadtrip to see if he was even going to be in town and to co-ordinate.  We tried to make it work and time everything as good as we could, but it almost didn’t happen.

On to San Diego…

We’d just cleaned up after getting our minds blown at the Culinary Lab and went to catch our breath and have a banana at a nearby Safeway parking lot when Luis looked at me and said “Should we call Miguel?” and after a little pros and cons of the traffic situation during rush hour around the Los Angeles area we each took a step back, simultaneously jumped in the air and high-fived while yelling YOLO! (It was a sight to be seen.. hopefully by nobody else.. ever…)

We jumped back in the Camaro and hit the road…. as far as we could before our first stau (traffic jam) which took all of about 5 minutes to get stuck in.

After about 3+ hours (normally about a 1 hour trip) and memorizing Drake’s Hotline Bling (after the 65th play in that timeframe) we finally came to the almost-bottom of the west coast, San Diego, found PancakeBot HQ, hugs and handshakes with Miguel and family and then straight into a hardcore geeking out session about the PancakeBot.

Finally getting the chance to meet in-person the inspiration behind the food printing wonder, Lily (his daughter) and meeting the rest of Miguel’s beautiful and awesome family (HUGE shout out and THANK YOU to his wife Runi for having us over) Earlier in the year Luis and I had the opportunity for an exclusive first look at the PancakeBot when we had Miguel on our 3D Food Printing Experts of the World Video Interview Series, check out that interview here: 3DFP VI#3 – PancakeBot Creator Miguel Valenzuela

Thank you to the Valenzuelas

Thank you again to Runi, Miguel and the whole family for inviting and accepting us in as if we we’re one of them!

No news if we said we are fans of Miguel Valenzuela. He managed to partner up with StoreBound to bring to Kickstarter the PancakeBot…

AND THEY ALREADY MADE IT!

Congratulation on this one! As backers we just can not wait to get our hand on a PancakeBot! To celebrate it we bring you a new 3d food printer interview, hope you enjoy.

A new 3d Food printer is coming this year, early second quarter of this year. And is none other than MiguelValenzuela‘s creation. A new PancakeBot. At 3DC we are ultrafan of his work. So hopefully his partner ship with StoreBound brings and awesome product to market!