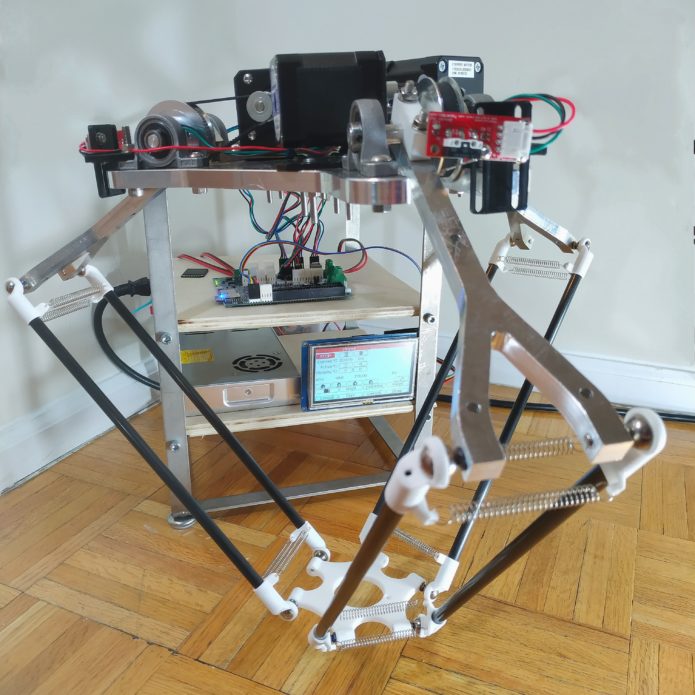 My 2019 3d food printing resolutions included, not only, a new 3d food printer. Pinya4 is a new iteration on the saga. The fourth one.

As mentioned in this previous post the main goals for my new 3d food printer Pinya 4 are:

My first iteration, does not tackle all these features. In fact it mostly focuses in a single one. Clean access to printing area.

The reason for this is to actually learn (start to) a bunch of new making skills:

From day one I wanted to use stainless steel for my printer. It is the “pro” cooking appliance material. Welding the body felt like the right way to get a sturdy frame. Also I got excuse to my first steps into TIG welding.

Of course this took way longer than expected, but through a some trial and error I got the frame done. Stainless steel is a harder material to cut, compare to aluminum, so that was intense. I was happy with the results and I even ended up welding the bolt joins!

This was a fun one, I wanted the new food printer to have as much as metal parts as possible. I quickly gave up on stainless part for my learning process with CNC. Thanks to the support from Hannah and Boris from New Lab I was able to jump on the Haas and machine the main plate and biceps for the printer.

🍍Pinya4🍍, my upcoming new 3d food printer, moving slowly but steady! 🐢🐢🐢 This is the new top plate that will hold the motors and arms. Machined in a #Haas CNC at @newlab, my first printer part there 🙂 . . . #3dfoodprinter #reprap #diyprinter #haas #6061 #3dprintinglife #rotarydelta #deltaprinter #fusion360

The following parts are the printer biceps:

Having quick access to New Lab printing service, it was a no brainer to take advantage of it. I printed the end effector, the ball joint cup and bicep to shaft thingy.

I used abuse FDM, but for more complex and tiny parts like the ball joint cup it makes a HUGE difference, thanks Alex!

Following picture is the second iteration of the ball joint cup:

RESULTS! This new ball joint socket does not snap on me everytime I try to use it 😆 . . . #stepbtstep #diy3dprinter #3dprintinglife #newlab #sls #3dprinting

Not a lot of reason was put into this change. Basically I wanted the firmware to have rotary delta kinematics, I was curious about the wifi integration, and wanted to try the RepRapFirmware.

I knew that not designing the whole printer in CAD, I use mostly fusion360, was a mistake. But at the same time I knew that If I had to put the hours to make a beautiful and full featured CAD I would had never started the printer.
Due to the lag of a proper full design, I did the following mistakes:

Although beyond this issues, I am really happy on how the printer looks and feels specially thanks to welding and cnc wise.

Being this my first (and so far) only stainless steel welding project I had zero idea about how to size the body. I used 1/2 in flat bar, that turn out to make the body quite springy.

Next iteration will have a stronger design, or so I hope!

Never thought about this until I had the first parts on my hand. The hanging head of the printer (includes motors and arms) is pretty heavy! So the tower needed to be at least twice as heavy. Right now it is not and I need to balance the printer with a pot full of coins.

Without thinking much I moved from magnet hold to spring loaded ball joints. I am already into my 3rd design iteration, and for some reason I feel they wont be the last one.

First iteration used only one spring, what made all the joints S-N-A-P

Second iteration used two springs, and a bigger “cup” to slide around the ball. I felt the surface in contact between socket and ball was too big and decided to do a third iteration. Probably this wasnt needed. Although I feel, deep down inside of me I was hoping to solve in hardware calibration issues in the printer.

Where to start here. This is my first rotary delta. In fact, I build the hardware before I even had a slightly idea of how to make it work. Obviously I still dont. I have managed to do some quick print, to clearly realize the need for a proper calibration day.

Printing food I have never worried too much about calibration, I dont think 1mm up or down matters much, but at least having a flat layer is a must… so it is clear that that is my next step!

There is still a long road ahead to get Pinya4 up and running, hopefully sooner than later we will get there. Once we have a solid foundation is when things are going to start getting fun, trying to solve some of our early design goals! multitool anyone???

Thanks a lot! Cudos to you if you made it all the way down here.

BTW, if you like what you read here, consider supporting us on Patreon that makes a world of a difference and help us to make more awesome things! 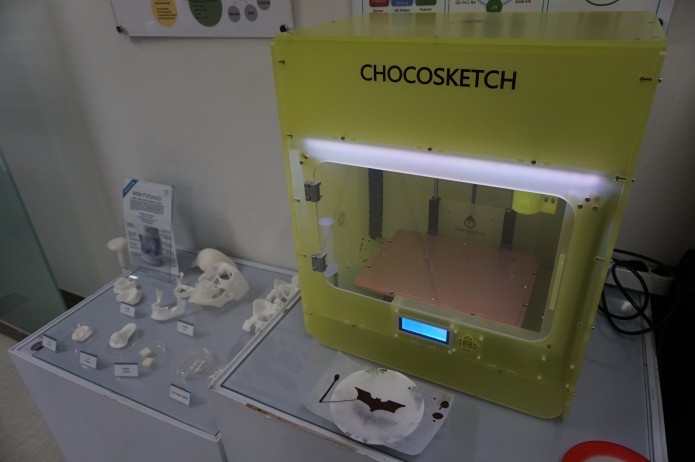 Last month we got the chance to visit the headquarters of Rokit in Seoul South Korea. Thanks to Shane we got to know more about the and their 3d chocolate printer, Chocosketch.

During our visit we got the chance to see the printer in action, taste its prints and get an overview of the features.

The Chocosketch is the chocolate Desktop 3d printer from Rokit. Rokit is a South Korean 3d printing company with printers that range from desktop to professional. 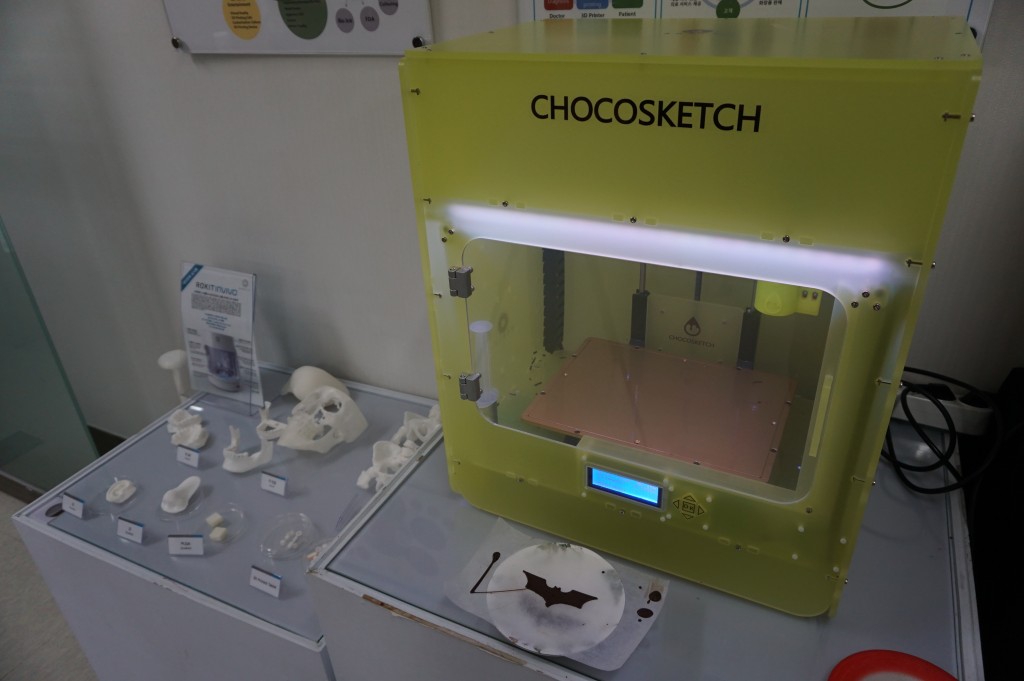 The printer works with syringes filled with Chocolate. Rokit provides 3 types of chocolate that has been tested. Those are white, milk and dark. You can use your own material although you would need to tweak the configuration parameters to make sure it works properly. 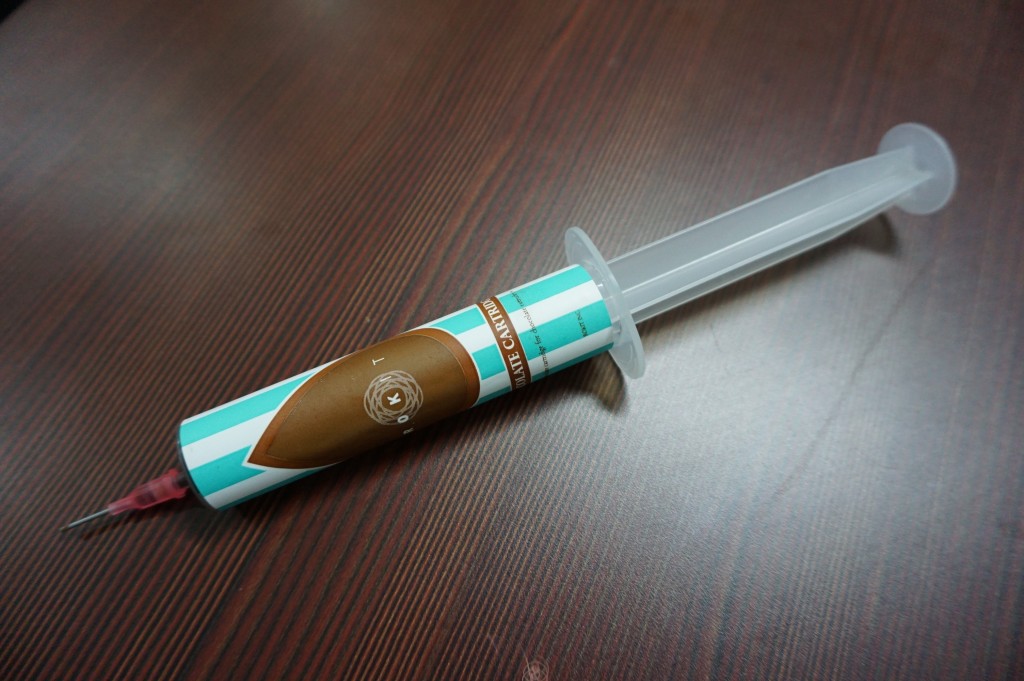 The printer has a preheat station in the inner left side of the printer, where cartridges can be preheated while printing.

This is especially good if you plan to print multiple or big items that might require more than one syringe of chocolate. 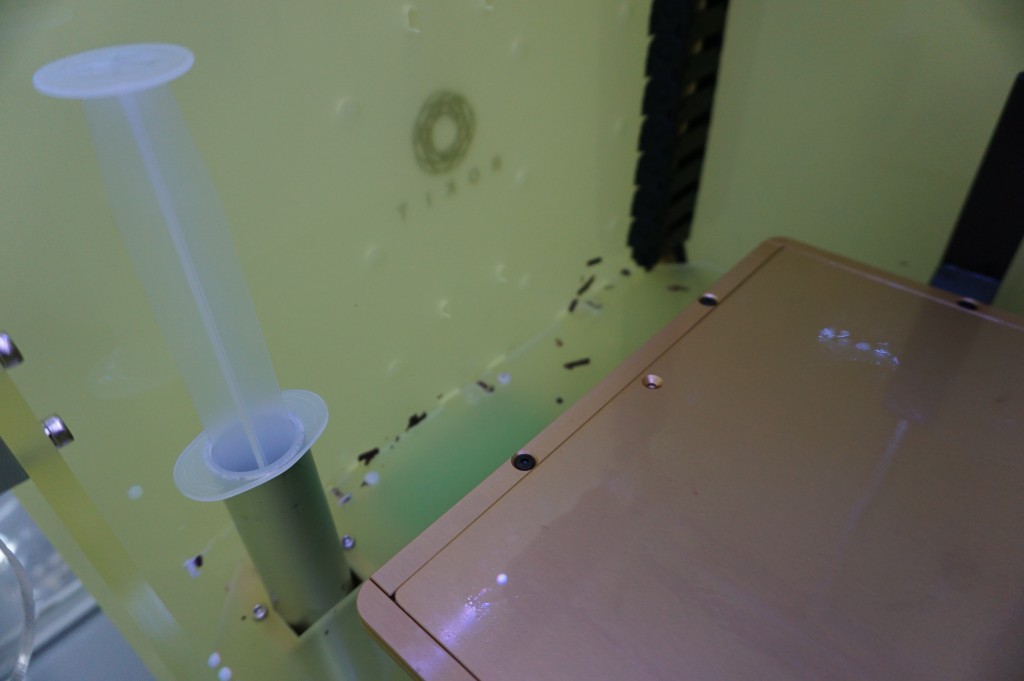 The build plate is made out of stainless steel, what makes it pretty easy to wipe out. Although It is fixed, so don’t expect to pop it into the dishwasher. Pro tip: for that use some cooking or wax paper, pro tip use some oil to stick it to the plate. 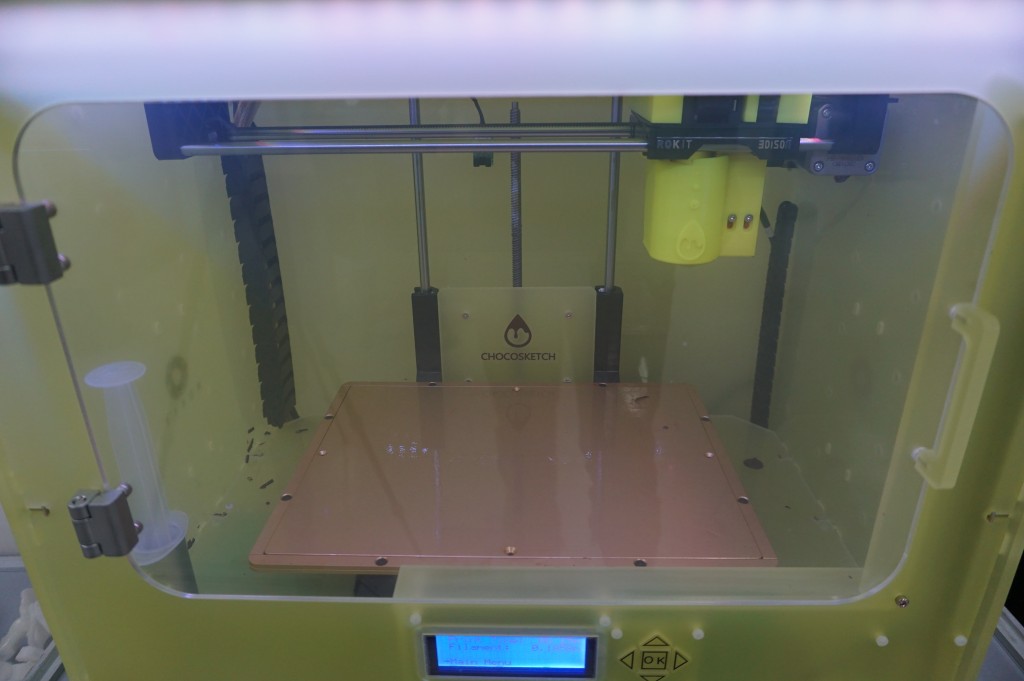 3d chocolate prints are possible by controlling the temperature. For that the the Chocosketch has a fan that forces air circulation. There is no active cooling system . Proper air circulation makes sure the chocolate sets and the nozzle does not get clogged.

The printer has a removable top for easy access to the extruder, to load and unload the syringes. 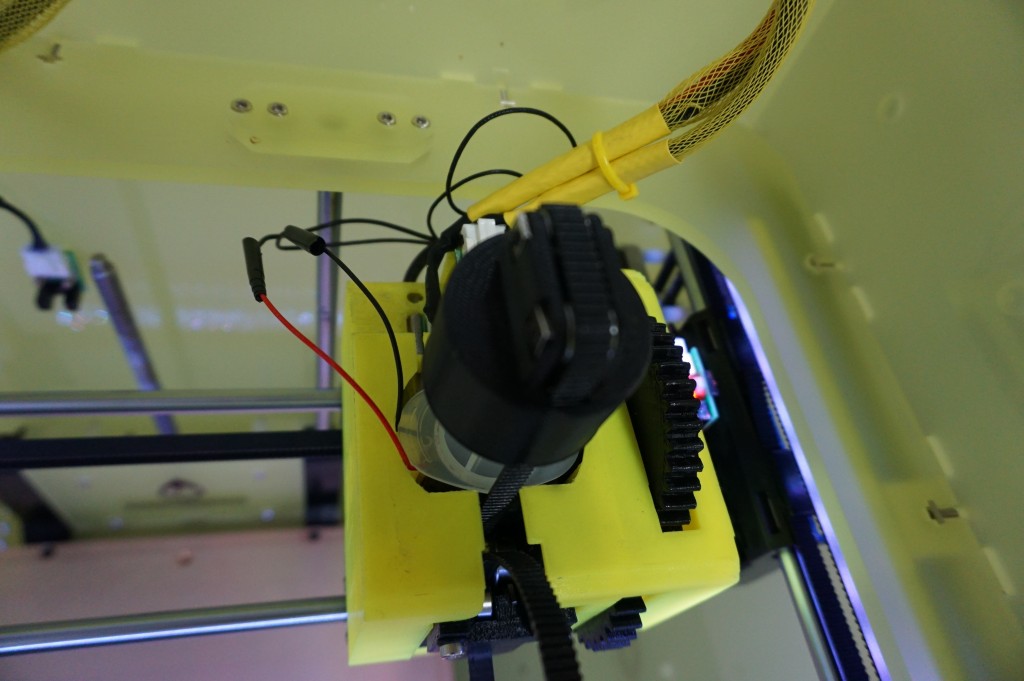 The extruder itself works similarly to the RichRap syringe extruder, where a belt pushes down the plunger. Obviously it includes a heating system that keeps all the syringe warm including the nozzle. 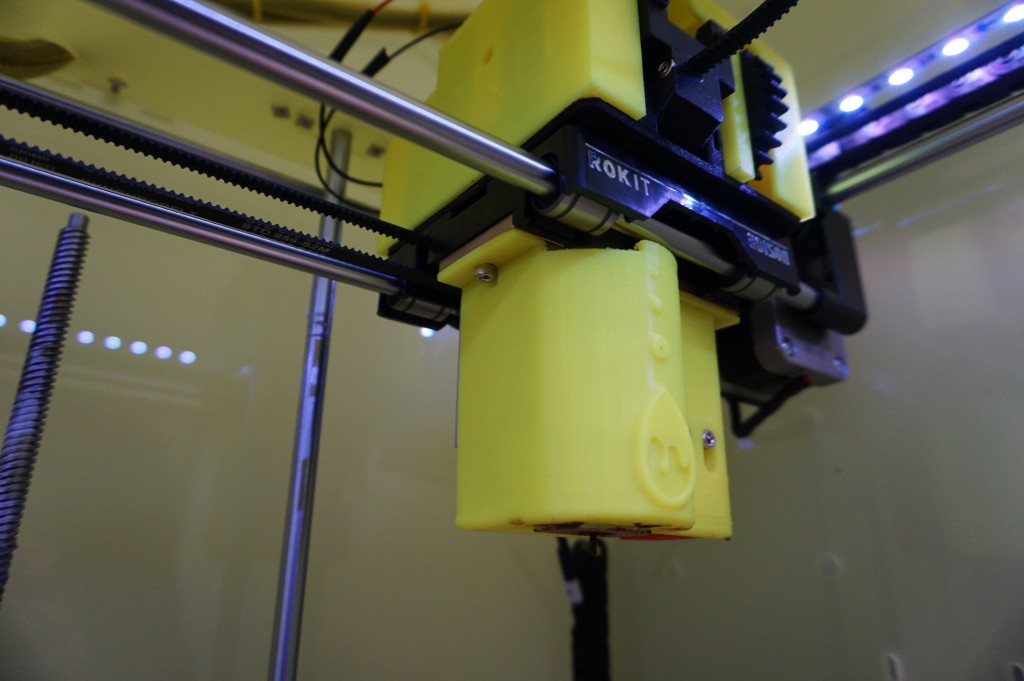 There is 3d different ways to send files to the printer. Using WIFI, USB or SD-Card.

The printer retails for about 2100$(depending on the country) and each preloaded syringe for about 5$.

For more information make sure to contact with Rokit. 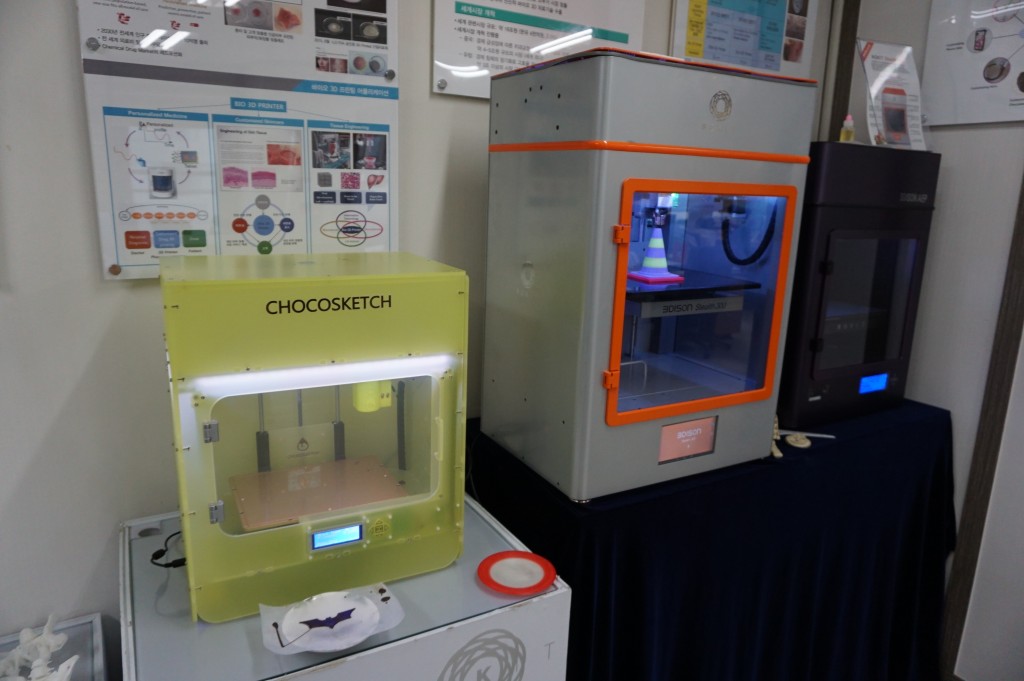 Thanks Rokit and specially Shane for letting us visit and get a closer view of the printer.

In this video we go through some of the reasons why we build Pinya3 a 3d food printing platform.

Pinya3 is the open source 3d food platform that we use to create our digital recipes.

This video was made during our time in Seoul. Thank you to the Art center Nabi for allowing us using their kitchen, where we did this walk though pinya3.

Pinya 3 was design to fit in the kitchen. The most important feature one was the dimensions. Fits perfectly under the cabinets of the Pier9 kitchen. Also the distant between towers was designed to easily slide in and out dishes. Also having a usb connector and a power plug, was an improvement from previous printers to be able to survive in the kitchen and to be easier to move around.

All the electronics are located in the upper side of the frame to avoid the electronics getting damaged by spills or food explosions that may happen during the kitchen wars.

The printer uses magnetic ball joints to remove and clean easily its parts. Also it makes easier to change the tool used.

Pinya3 is a 3d food printing platform because it can use many different tools, not just one.

The base is made out of stainless steel 304, with a thickness of 3mm. The rest of the frontal plates are to hold connectors, the LCD screen and to hide cables. This helps to give a more friendly appearance to the printer for when it needs to relate to people.

On the upper part we have the electronics. Pinya3 uses an Smoothieboard. It has a basic setup with the board with 5 stepper drivers plus 2 external ones. Also we decided to add the LCD screen to test how the interface will play in the kitchen and the interaction with people.

Also since it is Pinya3 it has 3 pineapples etched in the plywood parts.

We hope you enjoy this short explanation. If you have more doubts do not hesitate to contact with us! 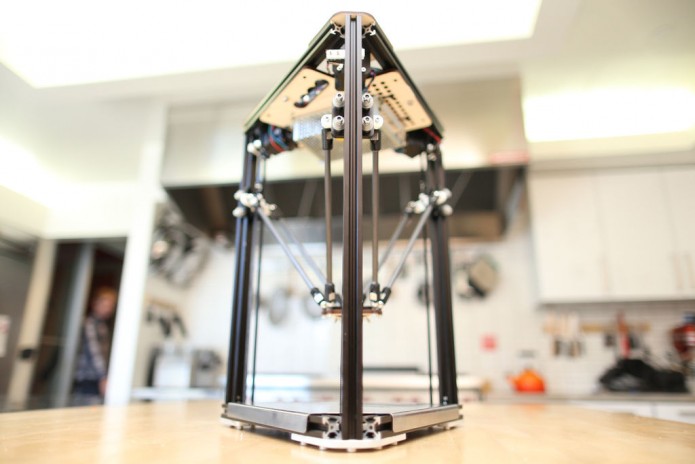 Yeay! Its been a fun ride at Pier 9. Building our new printer and learning loooooooots of stuff along the way. If you want to learn more about the process check the instructable here.

Choco Sketch it is a new 3d Food Printer announced by Rokit. It is exclusively design for chocolate. 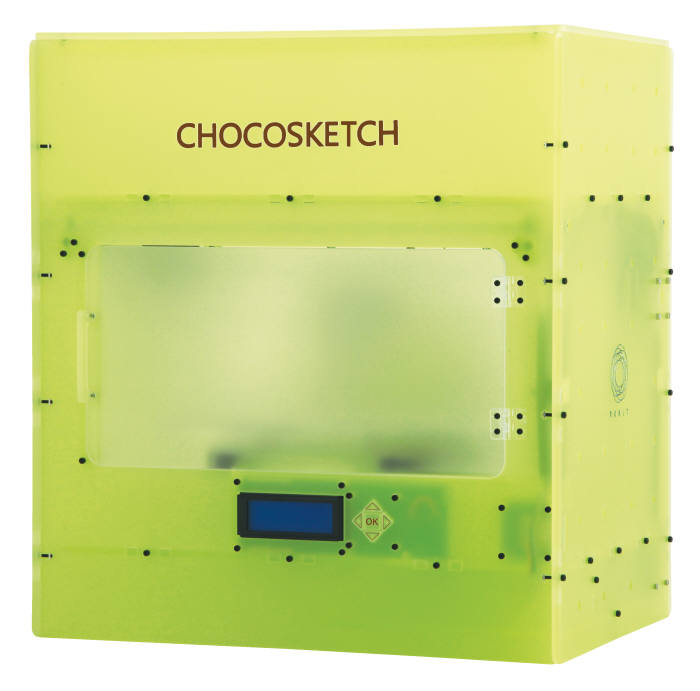 Here you can see a short video with a Yoda printed sample.

Not much info about it, expected price is 2Million KRW what it is around 1600€. Seems their paste extruder would be available too.

We want our 3D food printer (Pinya2) to print using bigger loads. Currently the main limitation for it is having magnetic joints sized for smaller load (<400gr).

This post is about our new magnetic joints design that must hold up to 1kg load.

END_OF_DOCUMENT_TOKEN_TO_BE_REPLACED

It is set on stone. 2015 is the year for 3d food printers. We have been getting a few emails from people looking for more information about available printers. That is why we decided to put together a 3d food printer list.

Our goal is to keep the list updated with every single new printer or update in the already available (some coming soon).