BotBQ is an awesome open source BBQ Extruder. Jason Ray did a tremendous job designing and putting together a great set of instructions to assembly your own at BotBQ.org. To celebrate this new 3d food printing family member Jason accept our interview request.

Could you please introduce yourself.

Jason Ray is my name and I am the developer behind the BotBQ which has forced me to recently update some of my skillsets to now include: born-again food enthusiast/engineer, Open Source 3D Printing Supporter (The community has really changed my life, mostly the RepRap community) and when I am not busy with the BotBQ I am working in the IT training industry to be able to pay for all of it. Father to one amazing daughter and married to the most amazing woman on the planet while currently residing in beautiful Germany. 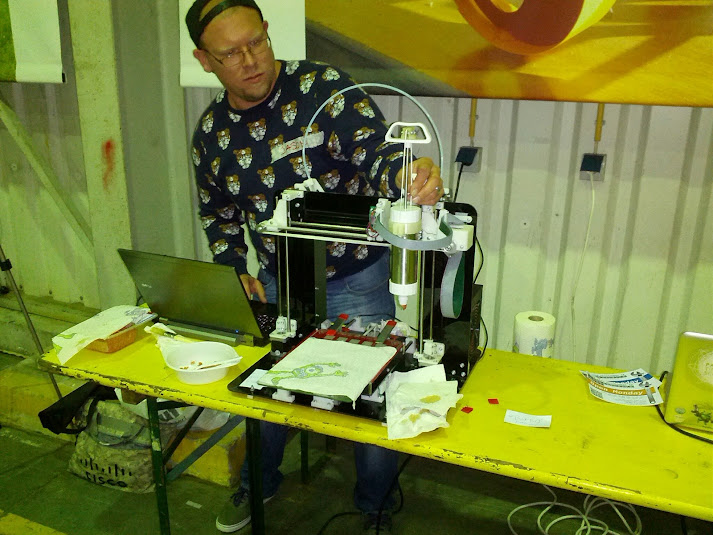 How did you got involved with 3d printing?

A few years ago a friend of mine (Marcus Link) called me over to Hackerspace FFM (the Hackerspace in Frankfurt Germany) to show me the future… When I got there I couldn’t believe what I was seeing. A little angry robot looking thing was melting down some plastic in a pattern onto this piece of glass and making funny noises and after a few minutes it created a tiny little elephant! I was flabbergasted and my brain immediately started thinking about ways to apply this to life as I knew it. After this I would dream for a while… never considering if it was even a fad like everyone said Hip-hop was back in the day, or how even the internet was considered back in the early ‘90s and finally got up the courage to approach my significant other about spending a bunch of money on a machine that could “make little plastic elephants!” That approach didn’t cut it, but as the RepRap community started growing and improving on the many designs that were out there the design that I was following (Mendel90) was about to be released as a kit by Nop Head and I was soo excited I basically wrote a book’s worth of notes for my argument on my second attempt to convince my wife why having a 3D printer in the house would help us greatly. She finally came around and I talked to Nop Head and in a few weeks I was stressing out over my new #3dprinterproblems, and loving every second of it! I even documented unboxing and building the Mendel90.

What is BotBQ? How did you start working on it?

The first name I gave it was “Bar-B-Bot” ….. Just sounded a little off, and it didn’t feel right. A couple minutes went by and I came up with “BotBQ” (Robot + BBQ (barbecue)) and it just rolled off the tongue and felt good when I said it out loud. It really came about during a discussion on a G+ photo album post from Mark Moissette about FabCon3.D. We were talking about the (then) upcoming #OS3DC and I kind of walked right into it when I mentioned “nothing goes better with 3D Printing than BBQ!” and that’s where I got into trouble…. I started getting a little over-excited and claimed we should create the first 3D printing BBQ. The BotBQ was born! I thought I might be on my own on this one but I knew couldn’t let the others down… So after some trial and error, and a lot of sleeplessness I created the BotBQ Extruder v0.9.1 and it was ready in time for the event (which was only a few months after that initial thread). I can’t take full credit for it though, without those people the BotBQ would not be alive, even though I had always been super intrigued by 3D printed food I have to thank all who gave me the inspiration for it in that thread and along the way). To avoid so many links please go here: 3D Printing BBQ for names and links. 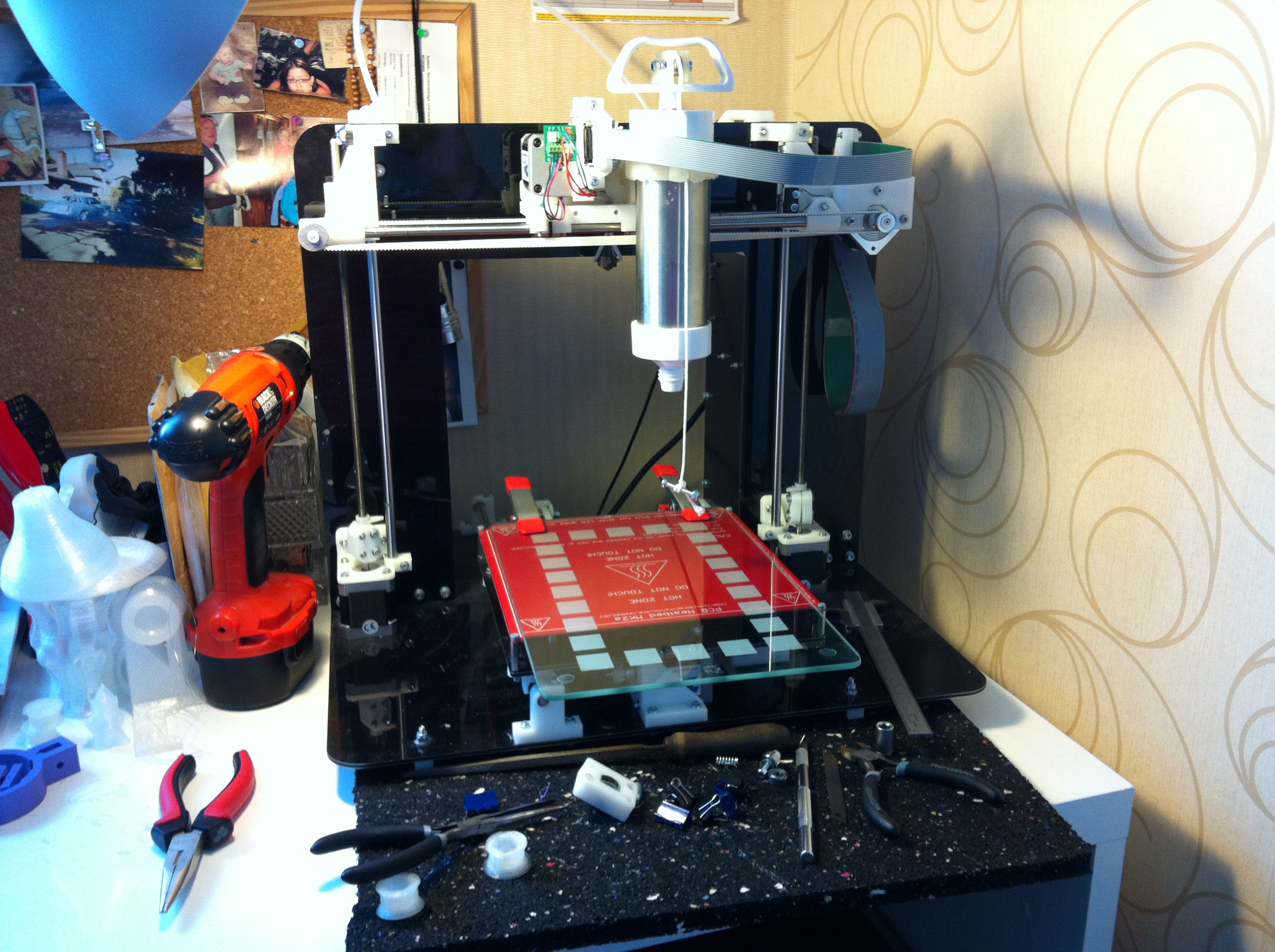 Open Source (Hardware) really means a lot to me; education, collaboration, community, growth, caring, sharing and many more things but most of all freedom. It allows ideas to grow into projects or products that can truly shape the world and it provides a platform for people to build relationships that might otherwise never happen. There are many ways to look at it but I really believe that when somebody releases something as open source one of their main motivations is to give, which is a trait that is sometimes tough to come by in today’s dog-eat-dog world. Although I haven’t done too much analysis on how the BotBQ is going to change the world it is my way of giving back in hopes it may be able to spur the next awesome idea, maybe even help fight world hunger or add creativity to the way we think about cooking our food for the future or it could just go down in history as a comedic approach to an awesome topic that hopefully put a smile on somebody’s face who was having a bad day.

What kind of feedback do you get from people when you show them your meat prints?

The first impression people have when they see it is to laugh out loud (“LOL” in Generation Z speak), followed by a furrowed brow, followed by a “REALLY???” Every time I introduce somebody to the BotBQ they don’t believe it and it even grosses some people out, but in the end everyone has a smile on their face either in disbelief or amazement that somebody would actually do such a crazy thing. Smiles are better than no smiles I always say! The only thing I haven’t been able to do is to have anybody but myself taste one of the 3D Printed Burgers because I haven’t looked into the amount of paperwork I nor they would have to fill out in order to take a bite of a burger printed on a 3D printer, and if anybody reading this knows anything about Germany and how much they LOVE paperwork over here I’m sure you’ll understand…. I do have it in the plans to make it as safe as I can and I will do it properly once I can offer somebody a bite of a BotBQ burger.

I read you are working on an BotBQ printer, can you explain us more about it? how is the project going on so far?

The BotBQ is, The Open Source 3D Printing BBQ.” I currently have two variations I am working on, and there is plenty of room to grow as well. One version will be a kitchen-top model (imagine if the George Foreman Grill and the Mendel90 had a baby) and a mobile version adaptable to your outside grill for when the weather is nice. Some exclusive info just for you too…. also working on cooking preference (medium, rare, well-done), thickness and an app for shapes/sizes as well! 3D printing a burger from your couch wirelessly will also come to fruition through use of the awesome OctoPrint and Raspberry Pi combo. I’ve found this project to be somewhat time consuming, but I am not a formally educated engineer. I am still (an always plan to be) learning new things everyday about 3D printing, but as with anything, once I get focused I am dialed in. The best time of the day I’ve found to work on this project has been in the middle of the night, either really early in the morning, or really late at night has been when I have done most of the work on the BotBQ. The kitchen-top is closer to completion that the mobile version, but both are still a ways away from being complete.

Do you think 3d food printing can have a big impact in our life?

I truly believe 3D food printing will have a huge impact on the future of our world. Some, such as NASA, believe that there will be just too many people on Earth and we must find new ways to think about what food is and how it should be created/delivered for human consumption. All those movies where people were popping a small purple ball as a meal will probably come true one day and it will be packed full of custom nutrients printed on the spot based on that individuals nutritional needs. Just thinking about that coming true with how we eat and consume today is sort of mind blowing right? FFF is currently revolutionizing how people and businesses prototype their products and even how they produce their products. 3D food printing will also revolutionize how we eat, what we eat, and probably even where we eat. Do you think the kitchen of today will become obsolete? Will gatherings even take place while waiting for the turkey to come out of the oven, or is just hanging out with a cup-o-joe with your Mother-in-law in the breakfast nook a thing of the past? Is the kitchen of the future just going to be a wall with a couple buttons and a slide door where your meal will appear after a couple minutes of buzzing and then a “ding” once your food has been printed? What about instead of ordering Domino’s pizza you just send a text message to them with your order, they send it straight to your 3D food printer and in 5 minutes you are eating a delicious piece of mediocre pizza!

I think the biggest setback we may encounter are the big guns (the larger 3D printer manufactures) and big brother (you know who you are) teaming up to destroy it all… and people possibly just giving up on it once they fear some lawsuit, or jail time for downloading or streaming the .stl file that holds the KFC secret recipe for their honey BBQ drumsticks. We may never get a chance to see the “Pirate-Bay of 3D Printed Sauces and Salad Dressings.” I hope that everyone realizes that we need this technology to stay as open as possible and if we can keep it like that, the human race may have a pretty decent chance at success 😉 Disclaimer: For the record I have no interest and do not intend on starting any pirate-bay of anything…

Could you share your opinion about the future of 3d food printing?

If what we saw in the cartoons and movies of the past which attempted to predict the future is starting to come to light in today’s hairstyles and skinny jeans, then we may want to go back and watch Total Recall or Back to the Future a few more times to see exactly what will happen down the road. Really I think that 3D food printing will look completely different than what we are doing right now. It will always be a perfect day when you can throw a steak on the grill and crack a couple cold ones with some friends but how do you feel about printing a steak shaped mix of nutrients that cooks like a steak, tastes like a steak, chews like a steak and smells like a steak, but didn’t come from a cow… instead it was generated from some lab that is popping out “fake-steak” at a fraction of the cost and time it takes to raise and process cattle all the while helping protein deficiencies in children who are starving and battling malnutrition. Isn’t that something that needs attention? I can’t predict the future but I have a hunch that there are problems out there, BIG problems, that 3D printed food can fix and if the BotBQ can add even a sliver of value to that research… just wow.